HOW on earth do you get chucked out of Carols by Candlelight?

Tree advocate Greg Smith can tell you: he was ejected from Bayswater’s Halliday Park event for protesting the felling of trees at the reserve.

“I was wearing a sandwich board sign with the signs reading ‘trees lest we forget’ and ‘Bayswater Urban Tree Network’,” he told the Voice.

The long-time Bayswater local has been ropeable ever since the council axed century-old trees in the park after claiming they were old and dangerous. Mr Smith wants to see independent expert advice backing up the claim.

At the December 13 event he was approached by two rangers who, he says, told him “it’s a private event and I was not allowed to protest at this private event”. 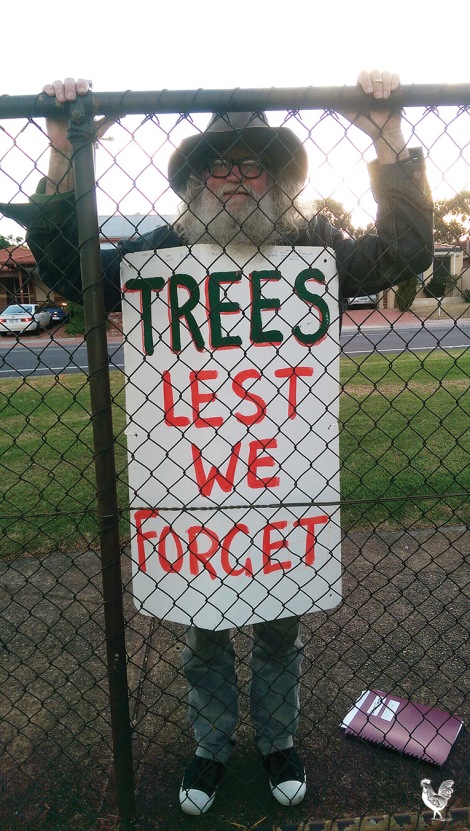 • Greg Smith—no room at the carols.

Formerly a veteran council planner, he’s lodged a complaint with Bayswater CEO Fran Lefante demanding to know what authority the rangers claim to have to remove people from a public park and, if they do, “why is it being used in such a capricious manner”.

He says he’s previously been told by rangers they have no power to deal with drunks hanging about the park, so he wonders why they are able to deal with protestors.

Mayor Sylvan Albert says a right to protest must be balanced with the council’s obligation to ensure families could enjoy their evening without being unduly disturbed.

“The city asked Mr Smith to move to the outer perimeter of  the event boundaries out of courtesy and respect to other people enjoying the carols evening,” the mayor said.

“This allowed him to continue to demonstrate and engage with people should he be approached, and simultaneously allowed the other visitors to  enjoy singing the carols undisturbed during the evening.”