PEOPLE with disabilities are being continually denied access to Acrod parking bays by selfish able-bodied drivers.

North Perth resident Mark Fletcher, who has multiple sclerosis, says he’s sick and tired of turning up to do his shopping only to find the allocated bays taken up by a tradie or time-poor clod hoping their quick trip will fly under the radar.

Mr Fletcher wants the state government to take over the enforcement of all Acrod parking bays, saying local parking inspectors seem to be blind to perpetrators, while the variety of signage in public and shopping centre car parks doesn’t give average Joe the impression that authorities really care.

“Some show a $500 fine, while others just $60, which is such a piddling amount that it’s not a deterrent at all,” Mr Fletcher said. 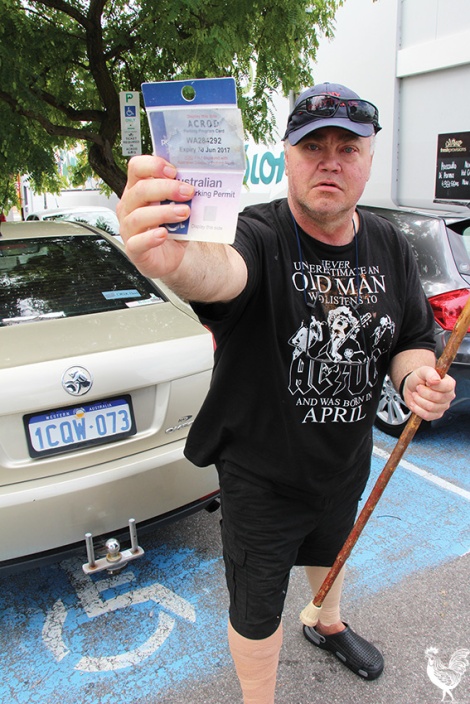 The former Perth Voice journalist and political staffer has taken to shaming bay-jumpers on his Facebook site, but says he has another weapon up his sleeve; two of the side-effects of his illness are an occasionally short fuse and the ability to talk for hours.

Three years ago the Barnett government doubled the maximum fine for illegally parking in an Acrod bay to $2000, and gave rangers the power to issue $300 on-the-spot fines, but the National Disability Service agrees with Mr Fletcher that there needs to be more monitoring and enforcement.

“From our point of view, people without Acrod permits misusing these bays is selfish and just not good enough,” she says.

“I think some people think, ‘I’ll just stop here for five minutes,’ but they don’t realise that those five minutes can prevent someone who needs the bay from carrying out their daily business.

“When it comes to private bays, that requires good corporate citizenship to ensure bays are accessible for those who need them,” Ms Waylen says.

There are currently over 78,000 Acrod permits in circulation in WA.

“It’s an issue that touches many lives, not just a select group of people,” Ms Waylen says.

by CHARLIE SMITH  and STEVE GRANT