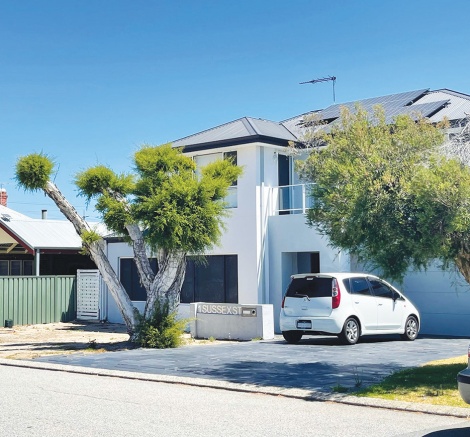 The tree’s maybe healthier than the Bayswater council agenda purports.

BAYSWATER council has decided against punishing a tree-pruning Maylands ratepayer by plonking a big three-metre sign on their front verge.

Bayswater staff advised councillors to take a tough stance over what they called a “vandalised” public tree on the verge outside 1 Sussex Street, but the owners claimed a misunderstanding leading them to think they had permission to prune the tree.

Homeowner Kiera Treloar fronted up to a council meeting, saying the tree was dropping branches during winter rains and during wild weather the family slept downstairs out of fear it would come down on top of the house.

She says her husband called the council and “spoke to a youngish sounding man who told us that there was a huge backlog in the pruning team and that if we believed the tree was posing danger to the property that we could take appropriate pruning action”.

Thinking they had the all clear they brought in an arborist to prune and lower the tree. It was a pretty close cut and initially looked so stark Bayswater staff advised councillors “the tree

in question was not pruned or trimmed; the top was completely lopped off which constitutes vandalism as it has severely damaged the natural form and function of the tree”. They said they didn’t know if it would even survive.

But reports of its near-death were premature and Ms Treloar says “it’s grown back in five months, so it’s about two metres shorter than it was but it’s still growing and flourishing”.

She cited the Miriam Webster definition: “Vandalism is wilful or malicious destruction or defacement of public or private property.”

“So given the information presented I’m hoping you’ll agree that us pruning our tree to protect our family and the property we own does not fit that definition.”

Councillors unanimously voted not to install the big shame sign as staff had recommended, instead just requiring the residents to pay for a new tree “to the satisfaction of the city”.

Cr Catherine Ehrhardt moved the lighter sentence, commenting “the best possible outcome in this scenario, instead of having just a big massive billboard to shame someone, is to get more trees in”.